Cutting Gaza off from the world

Humanitarian access in Gaza: a legal or a moral obligation?
Door: Maren Klein 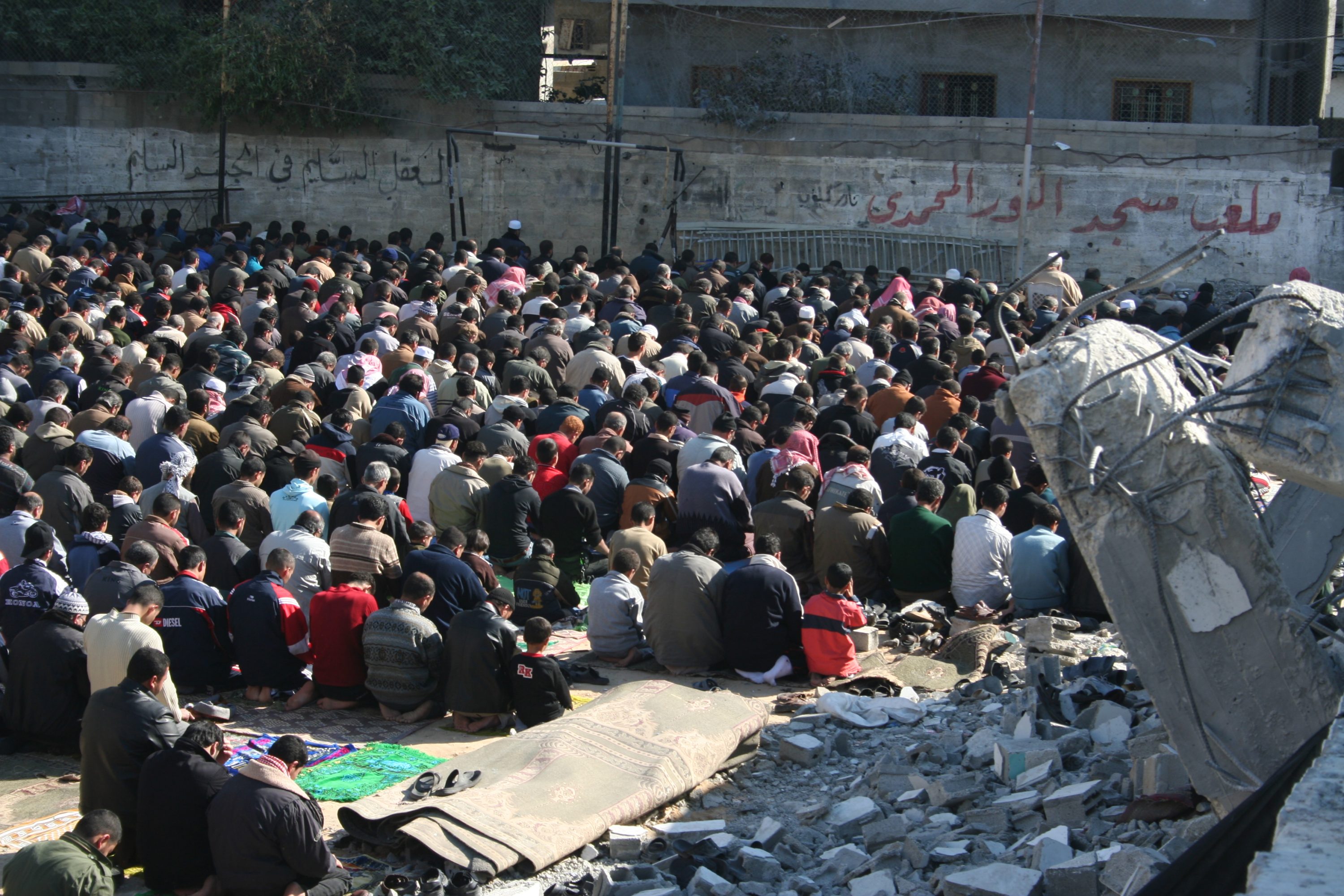 Israel and Egypt have closed Gaza off from the world. This blockade hinders the ability of human rights workers to travel into Gaza, where 80% of people rely on humanitarian assistance. This article examines the legality of this underexposed impediment of travel by Egypt in light of International Humanitarian Law.

For many years, Israel occupied the Palestinian Territories on both the West-Bank and in Gaza, and arguably East-Jerusalem as well. However, following the Oslo Accords, Israel disengaged from the Gaza Strip in 2005.[1] Hamas, which is considered a terrorist organization by Israel, the EU, the US and many more, won the Palestinian elections and is currently governing Gaza.[2] Following Hamas’ electoral win, Israel imposed even harsher restrictions on Gaza than it had before, resulting in a blockade. Israel now controls Gaza’s airspace, territorial waters and their shared border crossings.[3] In the south, Gaza shares its borders with Egypt. The relationship between Egypt and Gaza has never been an easy one. Throughout history, Egypt has at times controlled (part of) Gaza.[4] The buffer zone between Gaza and Egypt has, furthermore, seen many hostilities. Egypt has – like Israel – mostly closed its crossings with Gaza.[5] Israel and Egypt have in that sense cut Gaza off from the rest of the world.

This blockade by Israel and Egypt affects Gaza in many ways. In February 2018, Al Jazeera reported that the blockade had already resulted in a thousand deaths.[6] The UN Secretary-General has criticized the blockade by Israel and even called it ‘collective punishment’.[7] Access to medicine, education and the global economy are restricted, resulting in extreme poverty and unemployment.[8] Human Rights Watch has reported that the travel restrictions are affecting the ability of human rights workers to enter Gaza. This is very harmful to the Palestinians[9], especially since 80% of people living in Gaza are reliant on humanitarian assistance.[10]

The conduct of Israel regarding these travel restrictions, the blockade and the occupation of Gaza has been the subject of many researches and articles. I will take a different point of view and examine the conduct of Egypt. I will look at the legality of the travel restrictions on human rights workers as imposed by Egypt in the recent years and specifically at the Rafah crossing between Egypt and Gaza. However, Israel’s actions are referred to as well, due to their immense impact both on Gaza as well as on the duties of Egypt.

What rules apply?
International Humanitarian Law (IHL) is part of the framework of international law and regulates how States should act in three situations: during times of international and non-international armed conflict, as well as during occupation.[11] It exists to regulate the conduct of States during times of armed conflict and occupation. It tries to aid human rights workers and ensure that both civilians and combatants are respected and protected.[11] IHL tries to balance military and humanitarian necessities.[12] The type of conflict influences which body of IHL applies.[13] IHL provides for rules on the protection of civilians and combatants, and it provides for rules on the methods and means of warfare.[14]

Due to Israel’s power over Gaza it can, arguably, be considered to be occupying Gaza. The relationship between Gaza and Egypt, however, is different. Establishing the applicability of IHL with regard to Egypt is a lot easier. Gaza and Egypt are not currently in an armed conflict, nor is there currently any sort of occupation. As such, none of the three situations in which IHL is applicable applies to the relationship between Egypt and Gaza. IHL does, therefore, in principle, not apply. But Egypt does not get away that easily. As we will see later on, Egypt still has certain duties under IHL. The Rafah Crossing
As can be seen in Image 2, both Israel and Egypt are heavily controlling their land borders with Gaza. On top of that, it is important to note that Israel controls the airspace and territorial waters of Gaza, which means the border with Egypt is even more important for Palestinians. (Unspecified) security reasons are referred to as the raison d’être for this blockade of the Gaza Strip.[15]

How to cross Rafah
The strict rules at the Erez crossing and the blockade of Gaza’s airspace and territorial waters by Israel make the Rafah crossing an essential route to the outside world for all of Gaza’s residents.[17] The Gaza-Egypt border is about 12 kilometers long, with Rafah as the only point of crossing for persons between the two States.[18] Since 2005 the Rafah crossing has been subject to strict procedures. Over the past 13 years Egypt has changed its policy multiple times. At times Rafah was open almost daily. Since mid-2013 Rafah has, however, been mostly closed.[19] On the days that Rafah was open, Egypt, like Israel, only allowed certain categories of people to cross, such as those in urgent need of medical care. At other times the crossing was closed completely.[20]

The good news is that in 2018, Egypt has been more lenient in opening Rafah.

The low-point was 2017, when the crossing was only open for 24 out of 365 days.[21] The ever-changing policy and opening periods at Rafah result in a lack of clarity. Even those who do meet the travel requirements are unsure when they will be able to travel. As of August 2017, Egypt had a waiting list of 30,000 names meeting the travel requirements.[17] In other words, Egypt has imposed serious measures to restrict travel through Rafah. Egypt is in that sense not only restricting travel of regular civilians, but it also hinders the ability for much-needed human rights workers to enter Gaza, and (Palestinian) human rights workers to exit.[9] The good news is that in 2018, Egypt has been more lenient in opening Rafah. During Ramadan, Egypt opened the crossing, which was the longest consecutive period that Rafah has been opened since 2013.[22] In August of 2018, Egypt decided to open the Crossing on a more regular basis.[23] But the unpredictability of past decisions makes it unclear if this situation will continue, especially since Hamas and the Palestinian Authorities are having some difficulties on their side of the border. How restricting travel is (il)legal
Egypt has, thus, imposed two main travel restrictions that hinder human rights workers, namely: 1) requiring permits; 2) opening Rafah irregularly, with the number of open days dropping to 24 in 2017. As we saw before, there is no armed conflict in Gaza and Egypt is not occupying Gaza. This means that in principle, IHL does not apply. However, because IHL tries to offer as many safeguards as possible, Egypt indirectly still has several duties under IHL. First of all, IHL requires free passage of relief consignments, relief equipment and relief personnel by the parties to the conflict and by each other State that has ratified the Fourth Geneva Convention and/or the Protocol, which Egypt has done.[24] The International Committee of the Red Cross explains that the obligation to give free passage applies to others than the parties to the conflict if ‘their geographical position is such that the passage of relief consignments over their territory is necessary, or even simply useful, and that an appeal has been made to them in this respect’.[25] As neighboring State and party factually in control of the Rafah crossing, Egypt therefore has an obligation to allow humanitarian supplies, including relief personnel, to cross, especially since such relief is extremely necessary for the Palestinians.[26]

This obligation may be restricted to a certain extent, for example by setting up time schedules, prescribed routes or requiring a permit, as long as such restrictions are proportional. However, opening Rafah only a few days each year severely hinders the work of human rights workers and is not proportional. The situation in the Northern Sinai has been unstable for years, with terrorist attacks taking place across Egypt. Still, even though rapid and unimpeded travel is relative, and protecting against terrorist attacks is important, the current security concerns cannot justify opening Rafah only 24 out of 365 days. The humanitarian crisis in Gaza should require Egypt to do everything in its power to help the Palestinians. Even with good security reasons, closing Rafah most days is both disproportional and contrary to international humanitarian law.

Furthermore, the International Court of Justice has stated that all States have to ‘ensure compliance by Israel with international humanitarian law’[27]. Additionally, the Fourth Geneva Convention, on protection of civilians during armed conflict, establishes the obligation for all States to ensure that no one violates the provisions of the Convention.[28] The ICRC has explained this as ‘everything which can be done by a State to avoid acts contrary to the Convention being committed or repeated’. According to non-profit organization Gisha this means that Egypt has an obligation to open the crossing to avoid complicity in Israel’s violations imposed through Israel’s blockade of Gaza.[26] In other words, because Israel restricts the travel of human rights workers, Egypt has an obligation to ensure the passage of relief personnel.

Improving, but not enough
Many Palestinians are in need of humanitarian assistance such as food, clothing and medicine. Humanitarian organizations, such as the ICRC, work tirelessly to be able to provide such assistance. However, Israel and Egypt are hindering this task by restricting travel of human rights workers through rules and requirements at the Erez and the Rafah crossings respectively. Security reasons as the raison d’être for these strict requirements do not completely justify these restrictions. Israel as Occupying Power has a strong obligation toward Gaza that includes a prohibition of cutting Gaza off from the world. Most of the restrictions imposed by both Israel and Egypt are violating international humanitarian law. Both Israel, as Occupying Power, and Egypt, as neighboring State, have a legal obligation to ensure passage of relief personnel. Egypt, specifically, has the obligation to ensure free passage, because of the dire situation in Gaza and the lack of help from Israel. Luckily, Egypt has been more willing to open the Rafah crossing in 2018, and thus more willing to comply with its obligations and make sure Palestinians receive very necessary aid. These actions by Egypt are very promising, but only time can tell if Egypt will finally fully comply with international humanitarian law.

Maren Klein (1996) studies at Radboud University in Nijmegen where she received a bachelor’s degree in International and European Law and is currently pursuing a master’s in Human Rights and Migration. For several years now, Maren has been active as a volunteer for UNICEF the Netherlands, currently holding the position of Coach. She has a huge interest in and passion for human rights, politics and other cultures and is currently living in New Delhi, India, where she is doing an internship at the political department of the Netherlands Embassy.